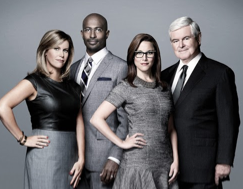 Newt Gingrich and Stephanie Cutter are the two hosts for the debut edition of “Crossfire” Monday night, CNN Washington bureau chief Sam Feist revealed on a conference call with reporters this afternoon. Van Jones and S.E. Cupp are slated to host on Tuesday.

The nightly program will feature two hosts and two guests each night. Each half-hour show will focus exclusively on one topic, which Feist said will give the show “a great deal more depth.”

Look for more on the “Crossfire” debut from TVNewser columnist Gail Shister on Monday.