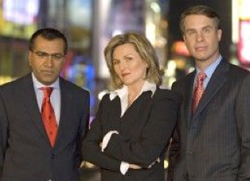 The Letterman-Leno rivalry may get the most attention, but in the past year, ABC’s “Nightline” has become the real late-night ratings champion.

Ratings for the 2009-2010 period were released Thursday, and “Nightline” emerged as the late night ratings leader for the first time in fifteen years. The news show–which ABC once seemed close to canceling–drew 3.71 million viewers, with 1.54 million in the coveted A25-54 demo.

CBS’ “The Late Show With David Letterman,” which benefited from the turmoil of the Leno-Conan O’Brien troubles at NBC, came in second. Letterman drew 3.63 million total viewers, and tied with “Nightline” in the demo.

NBC’s “The Tonight Show” beat its two rivals in the demo, with 1.65 million viewers. But it fell to third place in total viewers, with 3.5 million tuning in.

“This is a very proud day for all of us at ABC News,” James Goldston, executive producer of the show, said in a statement.