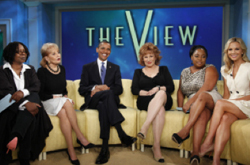 President Barack Obama’s appearance on “The View” with a convalescing Barbara Walters and her co-hosts reached 6.6 million viewers last week, the biggest audience ever for a show that’s been on the air since 1997, the Nielsen Co. said.

It was believed to be the first time a sitting president has visited a daytime talk show. Obama was indirectly responsible for the previous record for “The View,” when 6.2 million people watched the day after he was elected president in 2008.

“‘The View’ has proven to be an important stop for political candidates and is appointment television for our loyal audience who value our opposing views,” said Walters, who came in during her recuperation from heart surgery to appear with the president.

Obama reached more people on “The View” than he ever has on the Sunday morning political talk shows “Meet the Press,” “Face the Nation” and “This Week,” Nielsen said.

Nickelodeon’s “iCarly” had a big night Friday, with 7.7 million people watching a special episode that offered a glimpse of the lead character’s room for the first time, Nielsen said. That was a bigger audience than all but seven shows on prime-time broadcast television last week.

It was another slow summertime week for broadcasters, which couldn’t muster 10 million viewers for any program. NBC’s “America’s Got Talent” led the way.