Obama To Do “Daily Show” With Jon Stewart 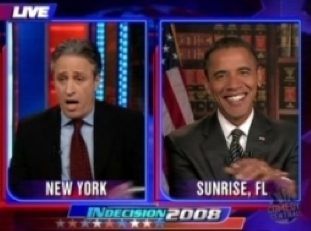 President Barack Obama is taking his campaign message to “The Daily Show” with Jon Stewart.

White House spokesman Dan Pfeiffer says Obama is taping an appearance on Oct. 27, just days before the Nov. 2 elections. Stewart is coming to Washington next week for the “Rally to Restore Sanity” he is holding three days later on Saturday, Oct. 30, on the National Mall.

The host of the Comedy Central show says the rally is for people who think the loudest voices shouldn’t be the only ones people hear.

Obama recently endorsed Stewart’s event. It will be Obama’s first appearance as president on Stewart’s program.

Obama To Do “Daily Show” With Jon Stewart