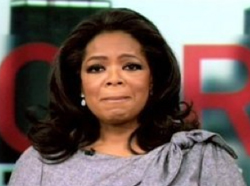 Oprah Winfrey’s charity, The Angel Network, is shutting down as her talk show draws to a close.

The network stopped accepting donations this week and said on its website that it plans to dissolve as soon as its remaining funds are disbursed.

The Angel Network was launched in 1998 with donations from viewers of Winfrey’s talk show; its demise stems from her decision to end her Chicago-based show in 2011, after 25 years on the air, Angel Network spokeswoman Angela DePaul said.

The website notice said Winfrey and the network’s directors are “extremely grateful” to the nearly 150,000 donors who gave more than $80 million to the charity.

The network website will continue and donors who still wish to contribute will be directed on that site to other charities, DePaul said.

DePaul said donations hadn’t dwindled but that it made sense to end the network as Winfrey sets her TV sights in a different direction.

Winfrey announced her round-the-clock Oprah Winfrey Network earlier this year. It is to start next January. She revealed last month that she’ll host one of its programs, a nighttime travel and conversation show called “Oprah’s Next Chapter.”