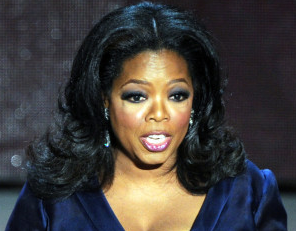 Oprah Winfrey says she understands why some balked when the film academy announced it would give her an honorary Oscar for her humanitarian contributions.

When the announcement was made over the summer, some criticized the academy for choosing Winfrey to receive its Hersholt award, which is presented periodically to “an individual in the motion picture industry whose humanitarian efforts have brought credit to the industry,” according to the academy’s website. Previous recipients include Elizabeth Taylor, Quincy Jones, Jerry Lewis and Paul Newman.

Critics said Winfrey belongs more to the world of TV than that of film.

“I understood it because I was equally surprised,” Winfrey said in a recent interview. “I was surprised because I am not known as an actress. I’ve done film and I love the films that I’ve done,” but she acknowledges that the list isn’t long.

Actor James Earl Jones and makeup artist Dick Smith will also be honored at Saturday’s ceremony at the Kodak Theatre, both receiving Oscars for their long and notable film careers.

Winfrey’s Hersholt award won’t be her first academy honor. She was nominated for a supporting actress Oscar for her role in 1985’s “The Color Purple.” She also produced and starred in the 1998 big-screen adaptation of Toni Morrison’s “Beloved” and 2009’s “Precious,” which won Oscars for supporting actress Mo’Nique and screenwriter Geoffrey Fletcher.

“I understand people thinking, `Where’s her list of credentials for films,'” she said, “but I don’t think there’s room for criticism in the do-good department.”

Winfrey has contributed more than $500 million from her personal coffers to charitable causes, academy president Tom Sherak said. She established her first charitable foundation a year after launching “The Oprah Winfrey Show” and has been a philanthropist ever since.

In 1998, she created Oprah’s Angel Network, which supported charitable projects and provided grants to nonprofit organizations worldwide. She funds scholarships for about 100 students in American universities, and in 2007 she opened the Oprah Winfrey Leadership Academy for Girls in South Africa.

Winfrey remains deeply involved with the school and its students, who call her “Mom Oprah.” She travels to South Africa at least four times a year to talk personally with the girls and takes calls in the middle of the night to discuss their progress and curricula.

“It’s the most exhausting thing I do, and the most exhilarating,” she said. “I have a little house over there – about 1,800 square feet of a house – and from the time I land my house is filled with girls. I am counseling girls, feeding girls, talking to girls, so it never stops.”

The school’s first senior class is about to graduate, and “100 percent of them are going to college,” Winfrey said with pride, noting they’re the first in their family to do so.

When she last visited, she conducted daily classes for the graduating seniors, “teaching them everything I wanted to know before I went out into the world,” she said.

“You know, about taking responsibility, about not accepting the credit cards, about values, about establishing a value system for yourself and how integrity is the most valuable thing you carry out into the world, and that without your honor and your integrity you have nothing,” she continued. “Then we talked about different ways that shows up for you. It shows up first with the boys!”

If she had to do it over, she “would certainly have taken another route, because it is really difficult establishing an institution for learning, excellence and leadership when you’re 8,000 miles away,” she said.

But the long plane trips and early-morning phone calls are more than worth it.

Winfrey will receive her Oscar at a private untelevised ceremony held at the Grand Ballroom at Hollywood & Highland, just upstairs from the Kodak Theatre, home of the Academy Awards since 2001.

Sherak said Winfrey is “one of the most philanthropic performers in the world” and “a perfect example of why this award was created.”

Winfrey said she was delighted when Sherak called to tell her she’d be receiving the Hersholt award.

“Years ago, I gave it to Quincy Jones and I was honored to be on the stage just giving the award,” she said. “To be the recipient of an award that’s given to you for your contributions toward doing something good for the world or trying to at least make a mark for a force for something that’s positive in the world, I just don’t think that there’s a better honor than that.”