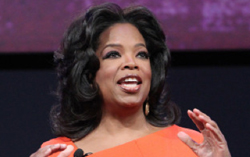 Oprah Winfrey has given the world 25 years of poets and politicians, A-list actors and musicians and talk show topics that defined and reflected American culture.

As “The Oprah Winfrey Show” ends, with 16 episodes left as of May 4, her millions of fans around the globe are waiting to see how she will close out a show that engineered a media empire.

Winfrey’s producers plan a star-studded, double taping on May 17 at Chicago’s United Center. The shows will air May 23 and 24, as Winfrey’s second and third-to-last episodes.

The show is dubbed “Surprise Oprah! A Farewell Spectacular.” Winfrey hates surprises, producers say, but she has agreed to this event.

But for fans, questions remain.

Who will be at the United Center that Tuesday night? Who will be beamed in by satellite or deliver a taped farewell message?

Winfrey has a stable of celebrity friends who have appeared repeatedly on her talk show. John Travolta. Tom Cruise and Katie Holmes. Jennifer Aniston. Chris Rock.

Could the Black Eyed Peas perform, as they did when Winfrey shut down Chicago’s Michigan Avenue in 2009?

Then there are the presidents and world leaders: Bill Clinton; George W. Bush; Nelson Mandela. President Barack Obama and first lady Michelle Obama have already appeared on a special show that aired Monday.