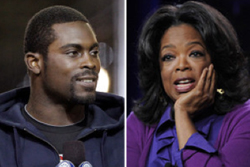 It turns out Michael Vick will not be making an appearance on “The Oprah Winfrey Show.”

Darren Rovell of CNBC tweeted on Wednesday that according to his sources, the Philadelphia Eagles quarterback has canceled his appearance on Oprah.

“After careful consideration, I will need to postpone the taping of the Oprah Winfrey interview scheduled for February 22,” Vick said in a statement. “I admire and respect Oprah and hope to be able to participate in an interview in the future.”

It was announced on Monday that the Pro Bowl quarterback will be a guest on her show next Thursday, February 24.

The interview was supposed to cover Vick’s time in prison, his work with the Humane Society and his return to the NFL.