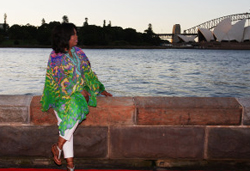 Fresh off an Australian tour with her frenzied talk-show fans, Oprah Winfrey is taking a respite in the South Pacific island nation of Fiji, where the military regime wished her “a great time.”

Fiji’s tourism minister said Winfrey was spending the Christmas holiday there and that officials wanted to respect her privacy. Local media reported she arrived Thursday and that she and longtime beau Stedman Graham were to stay until Dec. 26.

“We know she is here for a holiday and respect that, and the government obviously wants Winfrey to have a great time,” Aiyaz Sayed-Khaiyum, the tourism minister, said Saturday.

Tourism on Fiji is active, though relations with other countries have been strained by the lack of democracy since a December 2006 military coup. Australia and New Zealand imposed travel bans on Fiji leaders, and international trade sanctions have been imposed, but elections have only been pushed back.

The U.S. State Department has warned Americans to carefully consider the risks of travel to Fiji and to be vigilant while there. During a visit to Australia last month, Secretary of State Hillary Rodham Clinton called for democracy to be restored in Fiji and for political freedoms to advance.

The islands have been a frequent celebrity destination in the past. Rolling Stone Keith Richards famously fell from a tree at the exclusive Wakaya Club in 2006 and was rushed to New Zealand for brain surgery.

The country is serious about maintaining its image as a destination for stars who want to get away from it all in a hidden paradise, said Sayed-Khaiyum, Fiji’s top tourism official and its attorney general.

“Fiji is one of those destinations where we like people to come and have their own private time, and we’re here to ensure that happens,” he said. “We don’t want Fiji to become a playground for the paparazzi.”

Winfrey launched the 25th and final season of “The Oprah Winfrey Show” by surprising her audience with an eight-day trip to Australia. The lucky chosen fans snorkeled the Great Barrier Reef, surfed at Bondi Beach and explored the rugged Outback before Tuesday’s grand send-off: two star-studded shows taped on the steps of the Sydney Opera House.
Story continues below

Winfrey lavished praise on her Australian hosts, the scenery and the citizens, and countered criticism about the government footing the $5 million bill by saying the publicity will reap millions more.

“It is immeasurable what four hours of a love festival about your country broadcast in 145 countries around the world can do,” Winfrey told reporters.

Oprah Happy that Her Show is Ending