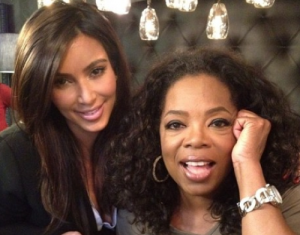 Before Oprah Winfrey interviewed the entire Kardashian Clan she never met them and never saw their television shows. That didn’t stop the talk show hostess from asking the hard-hitting questions, including asking if they’re “completely ego centered” and whether they’re “really ‘famous for being famous.”

And the question everyone wants to know the answer to,

“Was the marriage a publicity stunt? Why did she leave after 72 days?

Winfrey wrote on her facebook page, “her answer leveled me,” and she was shocked by what Kim revealed about her short-lived marriage to Kris Humphries.

The entire Kardashian family was interviewed for Sunday’s episode of “Oprah’s Next Chapter.” We have a clip where Oprah can be seen asking the tough questions to Kim, Kourtney and Khloe, as well as their mom Kris Jenner and the rest of the family.