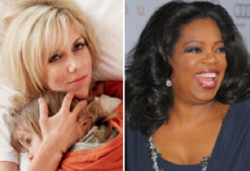 Oprah has landed one of the most sought-after exclusive interviews of the year: Rielle Hunter.

The National Enquirer (the de facto paper of record on Hunter news) is reporting that she will sit down with the queen of daytime for an interview during May sweeps. Hunter will reportedly allow Oprah into her Charlotte home for the interview.

“Rielle is super excited to have Oprah come into her home,” the Enquirer quotes an insider saying. “She’s excited about giving her account of how she met John, how the affair began and what’s in store for her future. Rielle also wants to clear the air about the GQ photos – she’s basically doing it to get the truth out and tell her side of the story.”

Hunter, who appeared in GQ last month, found the photos of her in the magazine “repulsive” and cried to Barbara Walters about them.

The Enquirer adds that she considered sitting down with Walters or her ABC News colleague Diane Sawyer, but ultimately felt that Oprah was “more spiritual and would get her.”

Oprah said last year that she does not pursue interviews all that aggressively.

Tina Fey Talks About Her Toddler