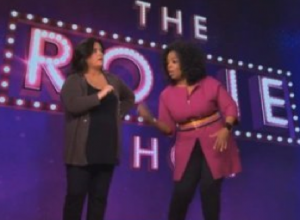 Oprah and Rosie O’Donnell brought in the highest ratings yet during their respective timeslots for the struggling Oprah Winfrey Network (OWN). Monday night’s debut of “The Rosie Show,” and “Oprah Lifeclass” were simulcast among five different Discovery Network channels (including Discovery-owned subsidiary, OWN).

“Rosie,” which marked O’Donnell’s return to the talk show world, outdid “Lifeclass,” which features Oprah looking back on her old shows, in the ratings, bringing in a total of 1.5 million viewers across all five channels. “Lifeclass” brought in 1.2 million. On OWN, Rosie almost tripled the ratings for the 7 p.m. hour from a 135,000 to 497,000 viewers. In comparison, Oprah drew 333,000 viewers to OWN. Of the four additional Discovery Network channels that aired the premiere, TLC had the most viewers. TLC lured 341,000 total viewers for “Rosie’s” and 336,000 for “Lifeclass, ” which meant TLC beat OWN in luring viewers for the 8 p.m. debut of Oprah’s new show.

The Washington Post highlighted that while “Rosie” and “Oprah” were great for increasing OWN ratings, they actually decreased TLC’s ratings. “One week earlier, in Rosie’s 7 p.m. hour, two episodes of “Little People Big World” had attracted an average of 525,000 viewers. And at 8, where “Lifeclass” ran this past Monday, one week earlier TLC had enjoyed nearly 700,000 viewers,” The Post’s Lisa de Moraes wrote.