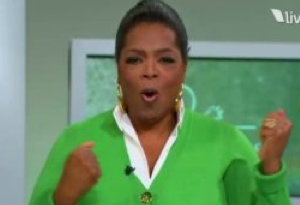 After 25 years on TV, Oprah Winfrey says she’s having the time of her life on the Web.

The 57-year-old mogul is connecting with viewers through her weekly webcasts, and she says it’s “the most fun I’ve had ever.”

Winfrey’s live webcast discussions about her new show, “Oprah’s Lifeclass,” have been so popular, they’ve been added to the lineup on the Oprah Winfrey Network.

“Lifeclass” premiered earlier this month and features Winfrey sharing her favorite interviews and insights from her long-running talk show. On Fridays, she discusses “Lifeclass” lessons during an hour-long webcast with a live audience, and invites viewers to comment or ask questions in person or through Facebook, Twitter and Skype.

Response to the webcasts has been so positive that Winfrey and her team decided to air them on OWN.

“That was my vision of what this network could be,” she said in a recent interview. “You’re interacting with people, you’re on TV, you’re saying stuff that you think is meaningful, you’re not just wasting people’s time, and people are acting and interacting with us at the same time. It’s just a fantastic experience.”

Interacting with viewers and inspiring them to think about things in new ways was part of her dream for her network, which launched in January. Though it drew low ratings initially, Winfrey said she feels good about OWN’s future.

“I’m going to build on the success of the connection to the Web response and to `Lifeclass,'” she said, “so I’m really excited about it.”