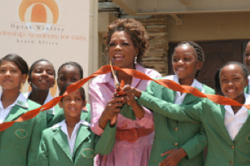 Oprah Winfrey has settled a defamation lawsuit filed by a headmistress she had accused of performing poorly at her South African girls school, where some students claimed they were abused, lawyers said Tuesday.

The lawsuit by former headmistress Nomvuyo Mzamane claimed Winfrey defamed her in remarks made in the wake of the 2007 sex-abuse scandal at the school. Mzamane said she had trouble finding a job after Winfrey stated she had “lost confidence” in her and was “cleaning house from top to bottom.”

A trial had been set to start next week in federal court in Philadelphia. Winfrey and several schoolgirls had been expected to testify.

A joint statement released late Tuesday by lawyers for both sides said Winfrey and Mzamane met to resolve their differences.

“The two parties met woman to woman without their lawyers and are happy that they could resolve this dispute peacefully to their mutual satisfaction,” the statement said.

Winfrey was visiting her school last week when U.S. District Judge Eduardo Robreno refused to dismiss the lawsuit, concluding Mzamane had presented enough evidence to go to trial. Court papers suggest Mzamane is again working at a school in Africa, but a Winfrey spokeswoman declined to say if the meeting took place during Winfrey’s trip.

The parties do not plan to discuss terms of the settlement, according to the spokeswoman, who works with Winfrey’s production company, Harpo Productions, which also was a defendant in the suit.

A dorm matron at the Oprah Winfrey Leadership Academy for Girls has been charged in South Africa with abusing six students. Winfrey has called the allegations crushing given her own stated history of childhood sexual abuse.

The dorm matron, Tiny Virginia Makopo, has pleaded not guilty to 14 charges.

Joy & Elisabeth Agree About Palin on “The View”