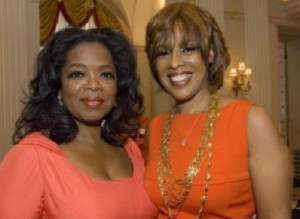 If you had “three months” in your office’s “When will Oprah appear on ‘CBS This Morning’” pool, then congratulations, you win!

When it was announced that Gayle King would be one of the co-anchors of the new CBS morning show, one of the first questions was when her BFF Oprah Winfrey would be a guest:

“We are not stupid with two O’s, she is a good guest,” King quipped at the time. “We will have her on when there is a reason to have Oprah on.”

That time is apparently now. According to CBS, Winfrey will talk about the situation at OWN–her struggling cable network–as well as life after her daytime talk show and her “Leadership Academy.”

For what it’s worth, CBS is marketing Oprah’s appearance as “Her first visit to ‘CBS This Morning.’”