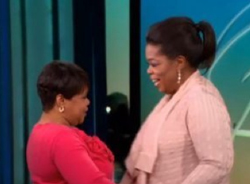 Oprah’s revelation that she has a half-sister she never knew existed drew her biggest ratings in nearly six years. The episode, which introduced Oprah’s sister, Patricia, and featured her reunion with Oprah and their mother, Vernita Lee (who kept her half-sister a secret for decades), drew a 9.7 rating. That’s the highest audience for an episode of the show since a post-Oscar edition in February 2005.