‘Oprah’s Next Chapter’ Delivers High Ratings For OWN 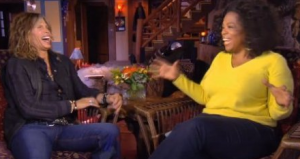 “Oprah’s Next Chapter” delivered record ratings for OWN, according to the Hollywood Reporter. The series premiered to 1.1 million viewers on on New Year’s Day, while the second episode topped that with 1.6 million viewers last Sunday.

The show features the former queen of daytime talking to public figures and private families outside of the studio. For the most recent broadcast, Oprah interviewed pastor Joel Osteen, who discussed his opinions on homosexuality. One upcoming episode will feature Oprah meeting a Hasidic Jewish family that has never heard of her before.

Sunday’s episode improved in its target demographic (women 25-54), and also provided a strong lead-in for “Oprah’s Master Class,” which had 930,000 viewers.

The ratings bump comes as welcome news for OWN, which struggled to gain traction in 2011. The lukewarm beginning prompted Oprah to double down at the network. She took the reins as CEO, and added her own show as well as Rosie O’Donnell’s.

‘Oprah’s Next Chapter’ Delivers High Ratings For OWN