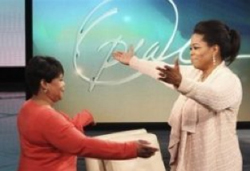 TMZ caught up with King in New York on Wednesday and asked her whether Patricia would be “set for life,” as many have speculated.

She added that Oprah and Patricia were “off to a really good start” and said that they’d had “a couple of meetings.” And she praised Patricia for not trying to sell her story to the media–even as she sat on the explosive news of her connection to Oprah for three years.

“The fact that this woman has known about this since 2007 and didn’t try to exploit it…when she really did have something to sell, I think speaks volumes.”

Behind The Scenes Of “The View” With Oprah