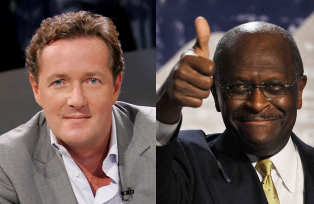 Piers Morgan and former GOP presidential primary candidate Herman Cain got into a bit of a Twitter battle this afternoon, with the CNN host repeatedly challenging the Republican to a public debate.

The squabble began this morning when Cain linked to his website’s write-up of Morgan’s explosive debate with gun advocate and musician Ted Nugent. “Piers loses another gun debate as his ratings falter,” Cain wrote. Morgan responded by demanding that Cain “stop mocking me from your keyboard” and challenged Cain, “if you’ve got the guts,” to debate guns on his CNN show.

Barbara Walters Calls Into ‘The View’