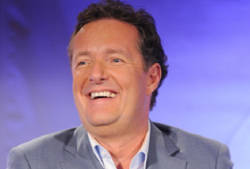 More details are emerging about the deals being brokered to allow Piers Morgan to replace Larry King.

The New York Times’ Brian Stelter and Bill Carter report on an imminent deal between Turner Broadcasting and NBC Universal to share Morgan — so long as NBC’s “America’s Got Talent” remains his top priority over any show he might host on CNN. Morgan also renewed his contract with NBC for three more years.

The UK Sun reports that Morgan has signed a four-year, over $8 million deal with CNN, where he will make approximately $2 million per year for 30 weeks per year.

The New York Post, however, reported that Morgan “is due to make $6-8 million a year over the next three years, according to sources.”

“Piers will continue on ‘America’s Got Talent’ for the next three years. That I can tell you,” Zucker said. “Having said that, I can also tell you he has approached us about asking us to do another job as well and those conversations are continuing….I don’t think they’re mutually exclusive.”