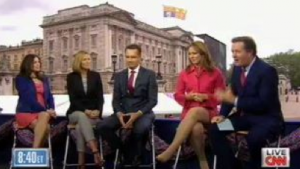 Four days of Diamond Jubilee celebrations culminate this morning with a parade through London. CNN is the only U.S. network carrying the procession in its entirety, with Piers Morgan and Brooke Baldwin anchoring a special running until 11amET.

ABC News will produce a special report around 10:25 when Queen Elizabeth is expected to appear at the Buckingham Palace balcony to wave to her subjects. Yesterday’s Jubilee concert broadcast live on the BBC peaked at 17 million viewers. The concert is being edited for an American broadcast airing ABC tonight in a special hosted by Katie Couricairing at 9ET/8CT.

As he has been this morning, multitasker Morgan Tweeted during the concert. One Tweet in particular drew the attention of proud Irish-American NBC’s Luke Russert:

WOW! Buckingham Palace ablaze with fireworks. Amazing. What a great night to be British. And what a terrible night to be a republican.

Did @piersmorgan just take a shot at Sinn Fein while tweeting his excitement about the jubilee?