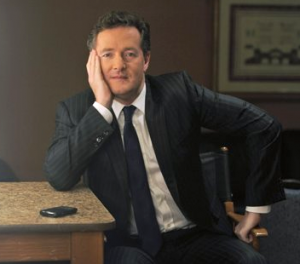 CNN celebrity interviewer Piers Morgan refused to disclose details Tuesday about his most damning link to Britain’s phone hacking scandal — his acknowledgment that he once listened to a phone message left by Paul McCartney for his then-wife Heather Mills.

In an eagerly awaited appearance before the U.K.’s media ethics committee, Morgan, who replaced Larry King on CNN, was visibly tense, sometimes hostile and often rejected characterizations of his actions made by inquiry lawyers as “nonsense.”

His testimony Tuesday was given under oath, and Morgan could be subject to criminal proceedings if he was found to have violated any British laws.

A key line of questioning centered on comments Morgan made in a 2006 article in the Daily Mail tabloid. In it, Morgan said he was played a phone message left by the former Beatle on Mills’ answering machine, describing it in detail and noting that McCartney “even sang ‘We Can Work It Out’ into the answerphone.”

Mills, who went on to divorce McCartney in one of most expensive separations in British history, has said there’s no way Morgan could have obtained the message honestly.

Morgan on Tuesday stubbornly refused to answer almost any questions about how he came to hear the message, saying: “I’m not going to start any trail that leads to the identification of a source.”

But when asked by inquiry chief Lord Justice Brian Leveson whether he could supply any information to back the assertion that he had heard the recording legally, the 46-year-old journalist said he couldn’t.

Earlier, Morgan said he “doesn’t believe” he had ever listened to hacked voicemail messages — and dismissed earlier interviews in which he’d discussed phone hacking at length as having been based on rumor and hearsay.

He also refused to say who had filled him in about the practice.

“My memory’s not great about this. It was a long time ago,” he said.

Morgan was giving evidence to Britain’s media ethics inquiry by video link Tuesday from the United States — one of dozens of phone hacking victims, journalists and tabloid executives to face the inquiry, set up in the wake of the uproar over phone hacking and other unethical newsgathering methods at the News of the World.

The atmosphere turned tense within minutes of Morgan taking his oath. He was quizzed about his relationship to private investigators and freelancers such as “Benji the Binman,” who specialized in raking though celebrities’ trash to look for scoops.

Morgan said he never dealt with private investigators but he did acknowledge buying information from Benji — and said he’d had some qualms about it.

Witnesses at the inquiry have exposed the seamy side of British journalism, with reporters accused of cooking up stories, blackmailing subjects, hacking phones and paying bribes to police officers to secure tips.

Murdoch himself may testify before the inquiry, according to an offhand comment made by inquiry lawyer Robert Jay. At one point Jay told Morgan to stop speculating about what Murdoch might have remembered about a particular incident in which the two of them clashed.

“We can ask him for his recollection of events when we get there,” Jay said.

The inquiry declined to comment further, and News Corp. did not immediately return an email seeking confirmation. Murdoch earlier in the year testified before Parliament on the subject of phone hacking and shut down the 168-year-old News of the World in July after the full hacking scandal broke.

CNN, meanwhile, broadcast its star’s testimony live Tuesday, but only to its international subscribers.

Oprah Refuses to Take Pictures at Her Christmas Party