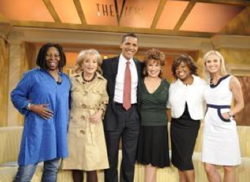 ABC’s “The View” has welcomed many notable guests, but none more prominent than President Barack Obama, who is scheduled to visit for Thursday’s edition.

In making the announcement on Monday, executive producers Barbara Walters and Bill Geddie said this marks the first time a sitting U.S. president has visited a daytime talk show.

They said the majority of the hour will be devoted to Obama’s appearance, which will touch on topics including jobs, the economy, the Gulf oil spill and family life inside the White House. It is scheduled to tape on Wednesday.

“We are so pleased and honored,” Walters said.

Walters will make a special return to the studio for the occasion, joining co-hosts Whoopi Goldberg, Joy Behar, Elisabeth Hasselbeck and Sherri Shepherd. Other than a brief segment broadcast from her home this month, Walters has been off the air since undergoing open-heart surgery in May and had not planned to be back until September.

Obama’s appearance is part of the show’s continuing “Red, White & View” campaign, which is committed to political guests and discussions. The show welcomed Vice President Joe Biden in April.