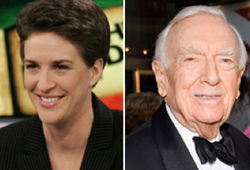 Rachel Maddow will receive an award named after Walter Cronkite.

The Interfaith Alliance announced Monday that it would award its 2010 Walter Cronkite Faith & Freedom award to the MSNBC anchor in honor of her work covering religion and politics. Maddow will receive the award alongside Chautaqua Institution Department of Religion Director Rev. Dr. Joan Brown Campbell.

The award, which will be presented at a gala dinner in New York in October, “recognizes individuals who courageously promote democratic values, defend religious freedom and reinvigorate informed civic participation,” according to the announcement. Cronkite served as Honorary Chairman of the Interfaith Alliance until his death last year.

“Walter Cronkite once told me that no less than the future of our nation was at stake in the work of Interfaith Alliance, and I can think of no two people who contribute more to advancing our mission than Rachel Maddow and Joan Brown Campbell,” said Interfaith Alliance President Rev. Dr. C. Welton Gaddy. “Rachel’s passionate coverage of the intersection of religion and politics exhibits a strong personal intellect coupled with constitutional sensitivity to the proper boundaries between religion and government.”