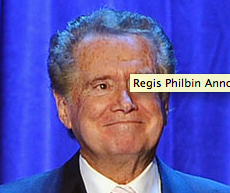 For the past 28 years, Regis Philbin has been hamming it up with his morning talk show. But on November 18, he’ll be signing off for good.

“Friday, November 18 is my last day,” Philbin announced on LIVE! With Regis and Kelly Tuesday. “But don’t worry, the show goes on.”

Philbin announced his retirement from the show in January this year. He took time off from Live! last year to have a blood clot removed from his leg. He also had hip replacement surgery in December 2010 and triple heart bypass surgery in 2007.

The show will continue with Kelly Ripa, who joined him as co-host a decade ago. No new co-host has yet been chosen to team up with Ripa, but the show is already working on finding a replacement.

“Kelly will be trying out new co-hosts, just like we did 11 years ago when we found her,” Philibin said. (Ripa, 40, replaced Kathie Lee Gifford following her departure in July 2000.)

Oprah Forces Her Employees to Meditate