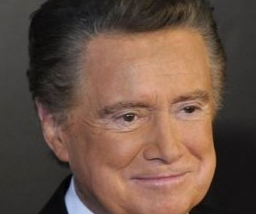 Regis Philbin left “Live!” with a huge bang after thirty years on-air — but don’t expect that to be the end of his television career. The beloved host, who is now 80, has his sights set on hosting a primetime talent show.

The New York Post reports that Philbin, who hosted the first season of “America’s Got Talent,” has formed a production company with a family competition show in mind. Philbin told the paper, “We’re contemplating a show that is sort of a talent show, but it involves the whole family.” He added that the concept would be “something new in our business.”

Philbin has also considered a variety-show, and said that he is aiming for an entertainment show. “Almost a variety show,” he said. “In our business you don’t want to say variety because it’s frowned upon now, but something with people who are performing.”

The show biz veteran has always maintained that his departure from “Live!” was farewell, but not goodbye. He reportedly explored a number of possibilities, including reality television, for his next move. But he cleared up rumors about a potential reality show in October, and has also dissed the genre.

Philbin called his exit from his morning show “all business,” chalking it up to unfavorable terms. The host has been notably pragmatic about the departure. He told the New York Post that Katie Couric owes him $10 after betting that he would cry on his last day (he didn’t).

He even shared his disdain for “all this farewell stuff that [executive producer Michael] Gelman ran for weeks, shoving it down people’s throats. He said, “It’s too much! People come to say goodbye… I’m not retired yet, I’m just moving on.”