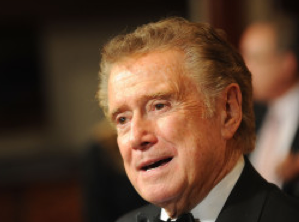 During an interview after a recent morning’s broadcast at his Manhattan studio, Regis Philbin engaged in little of his signature Regis-riffing. Looking back and looking ahead, he is reflective, earnest, a bit wistful.

For a while, he explains, “every time a new contract came up, I would say to myself, `Maybe it’s time to get out.’ Then I would say, `A, what am I going to do? I might as well continue.’

“Within the 28-year span there were times when I doubted that what I was doing was the right thing, was interesting, was funny,” he goes on. “Maybe one day we were a bust, and you would say to yourself, `Maybe this is over, and I can’t do it anymore.’ You have those doubts. But then it becomes 10 years, then it was 15, 20, 25.”

His wife, Joy, is supporting his decision, he says, “But I think she’s kind of worried: `He’s going to be home all day – what’s he going to do?’ Frankly, I think she’s a little concerned about it, to be honest with you, and I don’t blame her.

“So what do you think?” he abruptly asks his interviewer, switching on his Regis bombast. “AM I making a mis-TAKE here? IS it time for Regis to MOVE ON?”

But it doesn’t matter what others think. Philbin is already separating himself from the show, and his office bears that out. Seated at his desk, even with a life-size cutout of Dean Martin still standing beside him and the cushion in his chair displaying the logo of his beloved Notre Dame, Philbin is surrounded by growing disarray.

“We’re in the process of tearing this room apart,” he notes. “You collect 28 years’ worth of stuff, and you hate to suddenly put it in there” – he indicates the trash can – “so we’re putting it over there,” and he points to boxes filling up with souvenirs and curios.

“I feel almost relieved that I have made a decision,” he says. “And frankly, I’m enjoying the last few shows more than I had the last 20 years. I guess there’s a sense that, `Hey, enjoy it now, because this is coming to an end.’ But I’m not sure how I’m going to feel, not the next day, but the next month, just in case I really don’t move on to something else. And I might not: Who wants an old man, you know what I’m saying?”

Weeks ago, he had spoken of starring in some sort of reality show, but now dismisses that notion.

“It wasn’t for me,” he says. “There are a couple of other things I’m thinking about, but I don’t want to make a decision until all of this is over. Then I can think clearly.”

Meanwhile, he looks forward to easing the pace of his social life.

The host chat segment of “Live!” – the hosts’ impromptu give-and-take that precedes each day’s interviews with celebrity guests – “is what made the show,” Philbin notes, and it was often fueled by the respective on-the-town social whirl of Regis and his co-host.

“But I sometimes would have to force myself to go out and see a play or go to a party that I really didn’t care about,” he says, “to have something that I could talk about the next day.”

The host chat solidified his persona as the little guy against the world sounding off about familiar frustrations, even as he lived a life rubbing elbows with fellow celebrities. He was the toast of the town with the common touch.

“It all would come together,” he acknowledges. “But I would worry about it. That was a lot of pressure.”