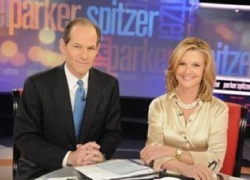 Kathleen Parker has grown so tired of co-host Eliot Spitzer that she is threatening to leave CNN’s “Parker Spitzer,” according to a report in the New York Post.

According to the Post’s Tara Palmeri, Parker thinks Spitzer has taken over the show while she has been demoted to second fiddle, and is “so fed up…that she’s threatening to walk.” Sources told Palmeri that Parker actually walked off the set during a recent taping of the show, though she returned to finish the segment.

“Some staffers said Spitzer…thrust himself up front and center right out of the gate, leaving Parker without a chance,” Palmeri writes. Meanwhile, Spitzer has impressed CNN bosses, though the show’s low ratings are a continual headache.