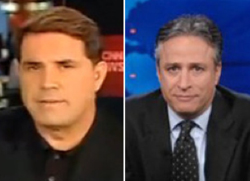 Rick Sanchez has reportedly apologized to Jon Stewart for his comments last week, which resulted in his firing from CNN.

rick apologized to jon stewart today.they had a good talk. jon was gracious and called rick, “thin-skinned.” he’s right. rick feels horrible that in an effort to make a broader point about the media, his exhaustion from working 14 hr days for 2 mo. straight, caused him to mangle his thought process inartfully. he got caught up in the banter and deeply apologizes to anyone who was offended by his unintended comments.

There was no comment on the apology from Mr. Sanchez himself, or from Jon Stewart — who, whatever he may have said to Sanchez in their conversation, went after Sanchez on “The Daily Show” Monday night.