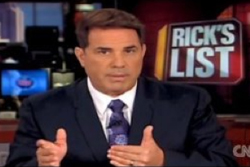 Nearly a week after making the controversial comments that got him fired from CNN, Rick Sanchez released a statement Wednesday apologizing for what he called “inartful,” “tired and mangled” words that he said “were never intended to suggest any sort of narrow-mindedness and should never have been made.”

In his statement, Sanchez said he had personally apologized to Jon Stewart, whom he called a “bigot” in his comments last week. He also said that he left CNN with “no hard feelings – just excitement about a new future of opportunities,” and will continue on his current book tour.

The “tired and mangled” statement would appear to back up what Sanchez’s wife, Suzanne, wrote in a Facebook post on Tuesday. In it, she blamed Sanchez’s “exhaustion from working 14 hr days for 2 mo. straight.”