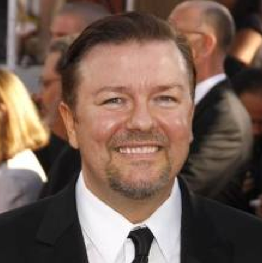 Ricky Gervais has been offered his own late-night US chat show on a major network – but turned it down.

The Office creator that he had received several offers from cable channels – and one from one of the big networks –to host a show to rival Jay Leno’s or David Letterman’s.

He admitted he seriously considered taking the job, but eventually decided he would rather work on his own projects

Speaking at the Edinburgh International Television Festival, Gervais said: ‘I’ve been offered it a few times, including once by one of the big networks

‘I’ve been tempted, but I didn’t get in this business to put on a suit and sit behind a desk for five days a week.’

Pushed to name the network by interviewer Richard Bacon, Gervais declined, saying it wouldn’t be fair as he had said ‘no’.

Gervais also said he had been offered the chance to host the next Golden Globes ceremony, despite hitting the headlines for supposedly offending the stars at this year’s event.

‘NBC have offered it me again, but I’m not sure about [award organisers] the Hollywood Foreign Press Association. I don’t know what it would look like me going back.’

Although he apparently caused offence among Hollywood’s A-list, he said: ‘Just because you’re offended doesn’t make you right.’

And later, on the topic of whether his comedy had a shock value, he added: ‘It’s so easy to shock. Everybody’s shocked all the fucking time. People who say I crossed the line… I didn’t draw the fucking line, you did.’

Gervais also revealed that he had originally been offered the starring role in the US version of The Office, but declined that, too. ‘What’s the point of that?’ he said – explaining that the show should have an American outlook, just as the UK one had a particularly British voice.

He added that he didn’t take on too many things outside of his own projects as ‘anything else has got to compete with the greatest job in the world – to come up with an idea and write and direct it.’