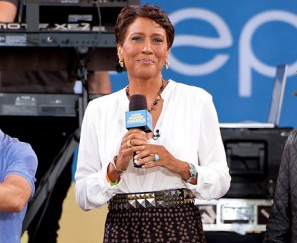 B&C’s syndication ace Paige Albiniak and local TV maven Michael Malone report that ABC “Good Morning America” co-anchor Robin Roberts has been floated as a possible syndicated daytime talk show host. Roberts could head to daytime as an expansion of “GMA,” though it certainly sounds as though no move is imminent:

Robin Roberts has been key to elevating Good Morning America ahead of Today, and keeping it there. But does the a.m. anchor have the star power to make her own daytime show fly? That’s what execs in the station and syndication community have been buzzing about in recent days since word spread quietly that Disney/ABC might consider a Roberts-led syndicated talk show as one of the next possible GMA spinoff projects, according to multiple sources.

ABC News has made no secret of its desire to elevate its GMA franchise further. But in a statement to B&C, Roberts said a new show for her is not on the table: “No one is developing any show for me nor are discussions being had to that effect. I am 100% focused on my health and anchoring GMA, now and in the future.”