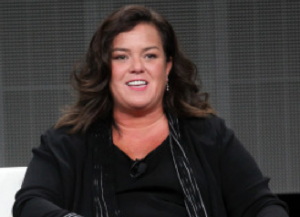 Rosie O’Donnell will have the support of a new girlfriend as she returns to television with her new nightly talk show, The Rosie Show, which debuts on Oprah Winfrey’s network, OWN, Oct. 10.

“I did not expect it when I met her at Starbucks,” O’Donnell, 49, tells PEOPLE of falling for I.T. headhunter Michelle Rounds, 40, whom she began dating a few months ago.

“She didn’t look like any lesbian I’d ever met,” says the talk show host. “But it’s fun and very exciting.”

Back on the air after a short-lived stint on The View from 2006 to 2007 and an 18-month gig on SiriusXM radio, O’Donnell credits hormone replacement therapy for making her life more manageable – and joyful – on all levels.

“I’m in menopause, and I’ve been having really bad hot flashes,” she says. But O’Donnell’s therapist offered up another reason for the heat: “She said, ‘ [It’s] because you’re also in love.’ ”

“It’s like you’re a withering rose and the petals are falling off and all of sudden you bloom again,” she says. “For me, [the hormones] have made a drastic difference.”