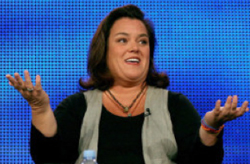 Rosie O’Donnell is set to return to syndicated daytime television, according to two reports Friday.

Early Friday, Showbiz411’s Roger Friedman began reporting that Rosie — who has both hosted a syndicated talk show and co-hosted ABC’s “The View” — would return to daytime TV:

Sources say that Rosie will fill the void left by Oprah Winfrey starting in the fall of 2011.

Rosie was overheard telling pals at Joe Allen’s restaurant in New York last night that deal is almost done to restore her to her place as Queen of DaytimeTalk.

Later, GossipCop reported that Rosie’s return to TV was a done deal, and that she would host a syndicated show beginning with the 2011-2012 season:

Rosie O’Donnell has signed a deal to bring a new talk show to TV syndication for the 2011-2012 season, Gossip Cop has learned exclusively.

Dick Robertson, former president of Warner Bros. Domestic Television Distribution, is one of the driving forces behind the show.

Rosie hosted a variety show on NBC over Thanksgiving 2008 that flopped in the ratings.

With Oprah’s show ending in 2011, there will be a huge void in the daytime TV landscape; it has been reported that ABC-owned “The View” is considering a move to syndication and could move to Oprah’s time slot. Ellen DeGeneres recently extended her deal with NBC-owned stations.