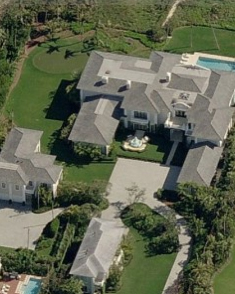 Most of the anecdotes strung together in Rush Limbaugh: An Army of One are familiar — the subject is hardly shy and retiring — but biographer Zev Chafets, a New York Times Magazine contributor, did achieve one genuine scoop: A first-hand tour of Limbaugh’s north Palm Beach estate, described by its owner as “actually quite modest by Palm Beach standards.” As David Frum observes in a Washington Post review, “Chafets exposes some disconnects between Limbaugh’s private life and public presence…some distinctly grandiose tastes in this self-imagined tribune of Middle America.” Here’s what he saw:

A five-house compound
Limbaugh’s ocean-front estate is made up of five separate houses behind gates that offer no “visible security.” The radio host himself lives, with a cat, in the largest, a 24,000 sq. ft. “mansion” that he renovated and decorated himself. The other four buildings are for guests. The estate, for which Limbaugh was recently offered $65 million, includes a putting green and a private beach.

Palatial, openly derivative decor
Limbaugh, a fan of conspicuous consumption, is “no Veblenite,” writes Chafets. The “vast salon” is an homage to Versailles. The main guest suite is “an exact replica of the Presidential Suite of the Hotel George V in Paris.” A “massive chandelier” in his dining room mimics one that hung in New York’s Plaza Hotel. Knick-knacks include a full suit of armor and a “life-size oil portrait” of Limbaugh himself.

An “inner sanctum”
When at home, Limbaugh spends most of his time in his “inner sanctum” — a two-story library which is a “scaled-down version” of the library at the Biltmore Estate in North Carolina. “Cherubs dance on the ceiling, leatherbound collections line the bookshelves, and the wood-paneled walls were once, he told me happily, ‘an acre of mahogany,'” writes Chafets.

A garage full of black, $450,000 cars
Limbaugh drives himself around in a black Maybach 57 S (cost: $450,000), and keeps a “garage full of them” for his guests. “Dignified black automobiles” are very much Limbaugh’s style, writes Chafets. “[He] is old-fashioned, even elegant in his personal furnishing.”

A $56 million airplane
Chafets spots a brochure on Limbaugh’s “onyx and marble” table for a Gulfstream G550, a $56 million private jet that the talk show host had recently bought. The biographer notes the “tastefully luxe” interiors and specs which include “armaments: CLASSIFIED.”