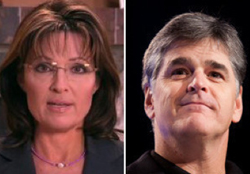 Sarah Palin will give her first interview since the Arizona shootings–and her controversial “blood libel” video–to Fox News’ Sean Hannity. Palin will appear on “Hannity” on Monday, Jan. 17. The New York Times first reported the news. The Times said that the interview is scheduled to span over several commercial breaks.

Palin has been a locus for criticism in the wake of the shootings, as people centered on her infamous crosshairs map, and then on the video she released on Tuesday which contained the “blood libel” statement.