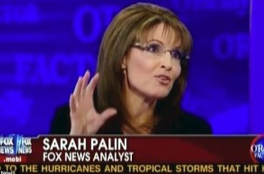 “I’ve had several conversations with Governor Palin in the past few weeks about her rejoining FOX News as a contributor,” Fox News CEO Roger Ailes said in a statement. “I have great confidence in her and am pleased that she will once again add her commentary to our programming. I hope she continues to speak her mind.”

After she left, Palin tested the TV waters in New York and Hollywood, and found interest from other networks, someone familiar with her decision says. Ultimately, however, Fox News offered the best deal in terms of salary and exposure. Palin is said to have some flexibility to pursue outside projects, similar to the TLC reality series “Sarah Palin’s Alaska” that aired in 2010. It isn’t clear how Palin’s new deal with Fox compares to her original FNC deal, which was believed to be worth seven figures.

“The power of Fox News is unparalleled,” Palin said in a statement. “The role of Fox News in the important debates in our world is indispensable. I am pleased and proud to be rejoining Roger Ailes and the great people at Fox.”