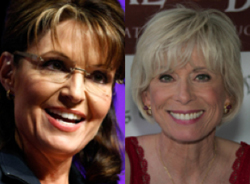 Sarah Palin has used Twitter to share some advice with Dr. Laura Schlessinger, the talk radio host who apologized and decided to retire from her highly-rated program after using the N-word on the air 11 times in 5 minutes.

It’s a breathtakingly tone-deaf bit of provocation — even by Palin’s standards.

Dr. Laura, as she’s known on her radio program, quickly came under fire for her remarks of a week ago. She immediately acknowledged the mistake and soon announced that she would end the show once her contract expires later this year. She currently commands the largest audience of any woman in syndicated talk radio and overall her ratings are among the top five hosts in the nation.

Palin, once the governor of Alaska and Republican nominee for vice president in 2008, has been using social media sites like Facebook and Twitter to push her messages in recent months. She fired out two messages about Dr. Laura on Wednesday night, the first reading:

That was quickly followed by:

Dr.Laura=even more powerful & effective w/out the shackles, so watch out Constitutional obstructionists. And b thankful 4 her voice,America!