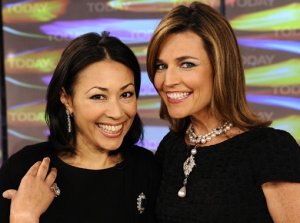 “Today” co-host Ann Curry will remain at NBC News after leaving her job as co-host of “Today,” according to The Hollywood Reporter. Curry will stay with the news division in a “substantial” role, the report says.

Curry won’t be working out an exit agreement that would pay her the remaining two years of her three-year deal, which is said to be worth $10 million a year, the story adds.

Meanwhile, sources say Savannah Guthrie, the current co-host of “Today’s” 9 a.m. hour, has been formally offered a promotion to Curry’s spot, according to the report.

Guthrie, 40, was the top pick of Jim Bell, the show’s executive producer, The New York Times’ Media Decoder reports. Guthrie also serves as the chief legal correspondent for NBC News, and previously worked as a White House correspondent for the network and as a co-anchor of one of MSNBC’s morning news shows.

Other media reports have indicated Hoda Kotb is still in contention for Curry’s job.

Commenting on the value of “Today” to NBC, THR notes: “The morning show is the signature brand and top money-making franchise in the NBC News portfolio, encompassing four weekday hours — including a 10 a.m. hour [that] has resurrected the career of erstwhile daytime diva Kathie Lee Gifford — and a popular website that generates three quarters of a billion page views each month.”

On Friday, NBC News President Steve Capus told the publication, “This is a big organization with a lot of things going on. As I’ve said a number of times, we are so much bigger than one person, one broadcast.”

Capus added: “We are going to field the strongest teams possible. We continually innovate and re-create ourselves, and we’re going to continue to do that.”