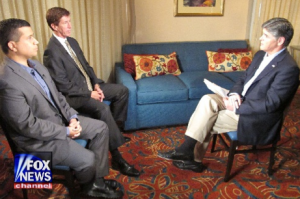 Zimmerman will discuss what happened on the night of Martin’s death. His attorney, Mark O’Mara, will also participate in the interview and will address rumors circulating about bail donations and hidden money, FNC says.

Hannity has been pursuing a Zimmerman interview for several months. The pair had an off-the-record phone conversation in April. Yesterday, GlobalGrind posted an article claiming that Hannity offered to pay Zimmerman’s legal fees; a spokesperson for Fox News told TVNewser Hannity has never offered to pay “any legal fees or any fee associated with George Zimmerman.”