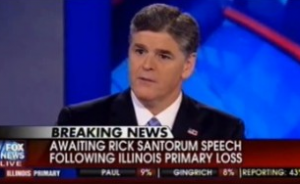 On his show Tuesday night, Fox News host Sean Hannity asked why it would be that President Barack Obama would decline an invitation to come onto the program for an interview, after he has mocked Obama for four years calling him “The Anoited One.”

“I mean, I’l tell ya, look…” he continued, “I think there’s a lot of people in the media — if you watch, you know, NBC and all these — they’re all sucking up to Obama. They won’t vet him like we’re going to do because they want interviews. Right?”

“He’s the President of the United States. I’d be respectful.”