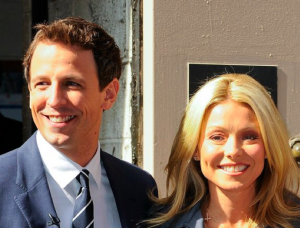 Meyers, according to a report last week, was said to be the front-runner to sit alongside Kelly Ripa — other names on the list included singer Josh Groban and retired football player Michael Strahan. The 38-year-old comedian is currently serving as a guest host on the morning show. But that’s where his morning duty will apparently stop.

In an interview with the South Florida Sun-Sentinel, Meyer gave little weight to reports he’ll step into Philbin’s shoes on a permanent basis. “No, no, no, no, no,” he told the paper.

“I know [Regis’ replacement] is a very important thing down there,” he added. “But, right now, what I would say to you: I’m really in love with the job I have. I’m very excited to be going back [to SNL] for the election season, which is always fun.”

A decision by Disney-ABC Domestic Television, which syndicates the show, on a permanent co-host is expected to come before the new season of “Live!” begins in September.