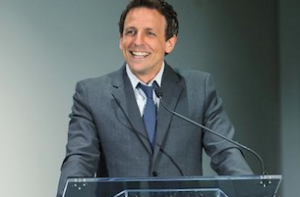 Once Jimmy Fallon takes over for Jay Leno on The Tonight Show, Seth Meyers, head writer for Saturday Night Live, will succeed Fallon as the next host of Late Night.

NBC announced the news on Sunday, a day before Meyers was to be introduced to advertisers at a presentation for the network’s new programming lineup. Meyers will stay with SNL through the fall until he begins preparation for the new gig, likely in January.

The move will, however, keep Meyers working with producer Lorne Michaels. “Working at SNL requires 100 percent of your mental capacity — on easy weeks. And so I had not really spent a lot of time thinking about what I was going to do next,” Meyers told the New York Times. “Obviously I can’t quit Lorne. So this seems like a pretty good deal that I have an opportunity to keep working with him.”

“The thing that’s staggering to me is that since 1982 there have been only three hosts, and Seth will be the fourth,” Michaels said. “And when you look at the company, it’s all pretty good company.”

Meyers noted that he’s aware of the history (David Letterman, Conan O’Brien, and Fallon are his predecessors), and that “each chapter of my life has sort of been spent enjoying each of the guys who had the job.” (And for those lamenting the future of SNL’s “Weekend Update,” Meyers said that’s one segment he’s hoping to be able to adopt.) Michaels further added that NBC had total agreement on choosing Meyers — indeed, “the only name that kept coming up was Seth.”

“It always seemed like a logical next move,” Meyers said. “It was just competing with the very emotional idea of leaving a place I have been for a very long time. But if you are going to do that, it seems like you might as well just move a hallway or two.”

Tonight, Late Night, and SNL will all be at NBC’s 30 Rockefeller Plaza headquarters in New York City.