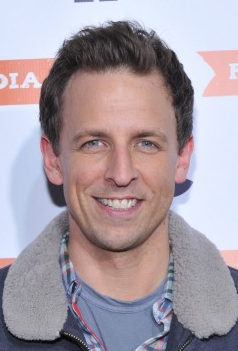 Seth Meyers is reportedly the frontrunner to take over “Late Night” if Jimmy Fallon replaces Jay Leno as host of “The Tonight Show” next year.

It’s expected that Fallon will make the jump to 11:30 p.m. in 2014, in which case “Late Night” will need its fourth host, following David Letterman, Conan O’Brien, and Fallon.

The New York Post and other outlets are reporting that Meyers, currently the “Weekend Update” anchor for “Saturday Night Live,” will be the pick.

The possible Meyers choice has NOT been confirmed.

Last year, Meyers was in the running to replace Regis Philbin as Kelly Ripa’s morning show co-host, but the job ultimately went to Michael Strahan.

Jay Leno Jokes About Being Replaced