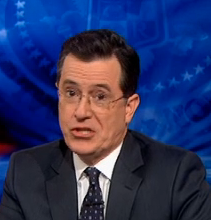 Comedy Central host Stephen Colbert will return to the airwaves Monday evening after a studden leave of absence last week, according to The New York Times.

A spokesperson for the network said that Colbert will resume production of new episodes, with novelist Ann Patchett scheduled as a guest for Monday’s episode.

Although not confirmed by the network, people close to Colbert indicate the comedian was looking after his ailing 91-year-old mother Lorna. He went on his Twitter page to express his appreciation for fans concerned about his situation.

“My family and I would like to thank everyone who has offered their thoughts and prayers,” Mr. Colbert wrote. “We are grateful and touched by your concern.”