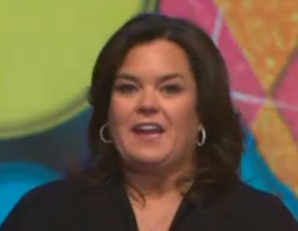 Rosie O’Donnell premiered her new show, “The Rosie Show,” Monday night on The Oprah Winfrey Network (OWN) to mixed reviews. The energetic show opened with Rosie delivering standup, followed by a musical dance scene with half-naked Broadway boys, a game show, and an interview with Rosie’s new obsession: Russell Brand.

Variety’s Brian Lowry described the premiere as “curiously flat and understated,” despite Rosie’s enthusiasm. Lowry predicted that success for “Rosie” will “rest heavily on the host’s lingering fan base.” In contrast, The Hollywood Reporter’s Tim Goodman praised the haphazard style of Rosie’s new show and said, “I don’t think Rosie stumbled at all in this first show. I think she was herself. I think the looseness is an asset. And if anyone tinkers with that, they’ll be making a huge mistake.”

The Los Angeles Times’ review also provided a favorable review of “Rosie.” The LA Times’ Mary McNamara described the premiere as a, “not-bad, pretty good, kinda funny, sort of smart debut.” The Times added that the show was not necessarily strong enough to “rock a major network back on its heels with joy,” but can definitely help OWN as it “provided an oasis of humor and sunshine.”

Before joining forces with Oprah and OWN, O’Donnell returned to television as a host of ABC’s “The View,” where she fiercely clashed with host Elisabeth Hasselbeck, prompting her departure. The Chicago-Sun Times recalled O’Donnell’s brief stint, and wrote that O’Donnell was back to her “jovial Queen of Nice, not the angry O’Donnell whose claws used to come out with Elisabeth Hasselbeck…” The Sun-Times also described the interview with Rosie’s celeb crush, Russell Brand, as providing, “the show’s most awkward moments.”

The New York Post differed slightly when it came to Brand, commending him for giving an interview which touched on some high and low moments of Brand’s life. The Post’s Linda Statsi wrote, “Somehow Brand managed to drift from hilarious riffs on tragic things like his own addiction and slaughtering animals to visiting a halfway house for recovering women. Now, that could have been very sad, but instead, Brand made it actually an entertaining way to deal with a big issue.”