“The Talk”: CBS Show With Julie Chen Gets Name 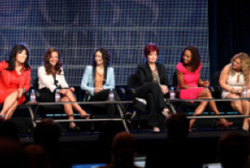 CBS’s new daytime talk show, set to premiere in the fall, will be called “The Talk,” according to reports from the 2010 TCA Summer Press Tour.

The show will be hosted by Julie Chen — who hosts “Big Brother” on the network and is the wife of CBS CEO Les Moonves — as well as a list of high-profile working moms: Sara Gilbert, Marissa Jaret Winokur, Leah Remini, Holly Robinson Peete and Sharon Osbourne.

The women, according to The Wrap, all said that “The Talk” would be a forum for honest discussion about news, issues facing women and mothers, and their personal lives.

But one topic remains off-limits.

“One thing that my daughter did say was totally off limits was her menstrual cycle,” Robinson Peete said.

“The Talk”: CBS Show With Julie Chen Gets Name