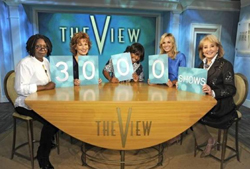 On August 11, 1997, television viewers were introduced to a new and diverse menu of talk, entertainment and lifestyle programming each weekday, as ABC Daytime launched “The View.” The show, originally billed as “ABC Daytime’s lively and informative new talk show,” has flourished into one of the most popular and most talked-about programs, and celebrates its “3000th Show,” live, on Thursday.