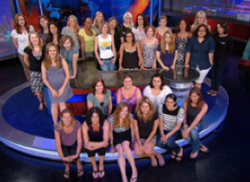 The “Daily Show” came under fire last month when Jezebel.com published a piece called “The Daily Show’s Woman Problem.” In it, writer Irin Carmon describes the popular comedy as “a boys’ club where women’s contributions are often ignored and dismissed,” and goes on to chronicle the stories of former and would-be correspondents. This came on the heels of rumblings of displeasure on women’s sites about the choice of Olivia Munn, host of “Attack of the Show!” and “Playboy” & “Maxim” covergirl, to be the first new female correspondent in seven years instead of a comedienne.

Today the women of the “Daily Show” responded to the press in an open letter:

Recently, certain media outlets have attempted to tell us what it’s like to be a woman at The Daily Show with Jon Stewart. We must admit it is entertaining to be the subjects of such a vivid and dramatic narrative. However, while rampant sexism at a well-respected show makes for a great story, we want to make something very clear: the place you may have read about is not our office.

The Daily Show isn’t a place where women quietly suffer on the sidelines as barely tolerated tokens. On the contrary: just like the men here, we’re indispensable. We generate a significant portion of the show’s creative content and the fact is, it wouldn’t be the show that you love without us.”

The letter goes on to dispute the allegations of sexism (which Jon Stewart alluded to in a rant against Fox News last week) point by point. But when you scroll to the bottom of the page to see the women’s names and what they do there, you see only two female writers and one full-time female correspondent (Samantha Bee). Hallie Haglund, the longest-serving female writer, has “5 years” written next to her name and title, but as recently as two years ago when I asked Hallie to blog for us she was a receptionist there, putting in her dues. The other female writer, Jo Miller, has been there under a year. Excluding the two women who founded the show, “DS” has only had two other female writers in its long history.

As we learned last year from NYT’s Bill Carter and Nell Scovell, women are universally scarce in late night television. As of the 2010 WGA Award nominations “Real Time” had none, Conan O’Brien had none, Leno had none, “Colbert Report” had two out of 15 writers, and the “Late Show” had none (until they hired the amazingly funny Jill Goodwin). The most women-friendly network show is Jimmy Fallon’s and on cable it’s “Chelsea Lately.”

Often the argument that “women don’t want the jobs” is extended when crews are faced with this kind of criticism. But this no longer holds true. There are huge numbers of hilarious women who want to work for the “Daily Show,” just as there are huge numbers of funny men who want to work there. Several of these women were quoted in the Jezebel piece.