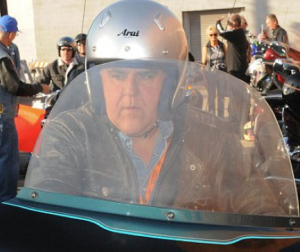 In pre-race remarks, Leno reportedly told motorcycle riders: ‘Every year, [the organizer] says ‘Drive safe.’ I’m gonna say, ‘Don’t drive safe. I want to see somebody go down. So it’ll be fun. I want it to be in front or behind me and see a whole row of bikes go down. Get drunk, fall off the road. We’ve all become too damn polite… We haven’t had one incident.”

But little did he know, the event would have an incident, a fatal motorcycle accident that claimed the lives of two participants.

The victims, Romarino Zeri and his passenger Julie Cameron were riding together when they collided with a big rig on the northbound 5 freeway.

California Highway Patrol Officer Christian Craycraft said the motorcycle was riding between lanes when the motorcycle crash happened. Another police officer, José Barrios, told the Glendale News-Press that the truck’s rear tires ran over Zeri and Cameron, who were pronounced dead at the scene.

The wreck was the first fatal crash in the ride’s 28-year history.

Moments after Leno’s remarks, one of the participants reportedly blogged: “I wish he had not joked about that, if someone does go down, he is going to feel really bad for his comments.”

Just before the fatal crash, Leno came to the aid of a rider in separate accident, and accompanied the injured man to the hospital, according to the LA Daily News.

On the Love Ride website, event chairman and founder Oliver Shokouh posted a statement, saying: “We, along with our family of riders, mourn the loss of our friends, Romarino Zeri and his passenger, Julie Cameron. Our heartfelt condolences and sympathies go to their families and friends… Together we will honour our fallen.”

Last night, Leno’s monologue was packed with jokes about Lindsay Lohan and Muammar Gaddafi, but he did not speak about the accident. Calls to NBC Universal were referred to a publicist for The Tonight Show, who was not immediately available for comment.